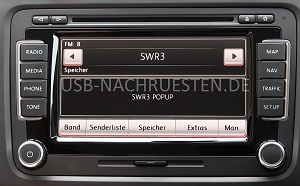 Do you have a VW Volkswagen radio RCD 510? With us you can retrofit Bluetooth adapters and Digital radio DAB+.

This factory-installed radio is model VW Volkswagen radio RCD 510 is fastened with screws. TORX T20 screws are usually used as screws. The screws are located under panels which can be removed quickly and without damage using the tools offered in our shop. It is with a Media-In interface (MDI technology).